12.03.12
A month ago the leader of the Ukrainian Greek Catholic Church (UGCC), Major Archbishop Svyatoslav (Shevchuk) was invited to visit Germany by Renovabis. During His month in Germany, the leader of the UGCC met with German officials, lay representatives of the Catholic and other churches in Germany, leaders of the charitable organizations Renovabis, Church in Need, and Caritas Germany.

Major Archbishop Svyatoslav visited Political Berlin, the first phase of the visit included a meeting with The German Chancellery. The Most Reverend Svyatoslav Shevchuk also visited the Ministry of Foreign affairs and the Federal Ministry for Economic Cooperation and Development. The current political, economic, religious and socio-political situation in Ukraine was analyzed during the meetings. His Beatitude explained how contemporary politics in Ukraine affect the Church and confirmed that many Ukrainians would prefer if the President and government didn’t favour one Church over others.

A lot of time was devoted to keeping relations between confessions amicable; 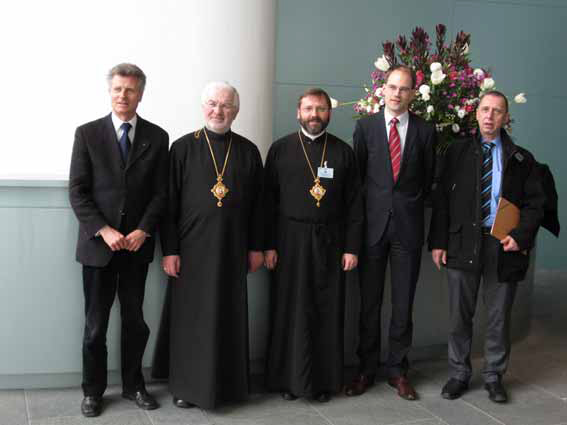 how to foster mutual respect and cooperation among them so that they can work to benefit society. German politicians and their Ukrainian guests agreed to closer cooperation in the future.

His Beatitude Svyatoslav found that the German Chancellery supported him on issues of European migration. “A favourable attitude and the desire to cooperate were and remain the foundation of the relationship between the UGCC and the government of Germany. Our mutual goal is to form a nationally conscious and politically mature society,” noted the UGCC leader.

Mr. Waskowycz led discussions on caring for Ukrainian migrants and protecting their rights in Western European Countries. The discussion focused on the Apostolic Exarchate for Ukrainians and their spiritual leaders, who should make efforts to improve the living conditions of their fellow countrymen who have come to work in Germany.

“Deacons play an integral role in serving the Church. They serve to educate the laity, so that citizens are aware of their rights and justice, and can become politically responsible for their society and its development,” said Svyatoslav when he visited the Central Office of Caritas Germany in Freiburg. 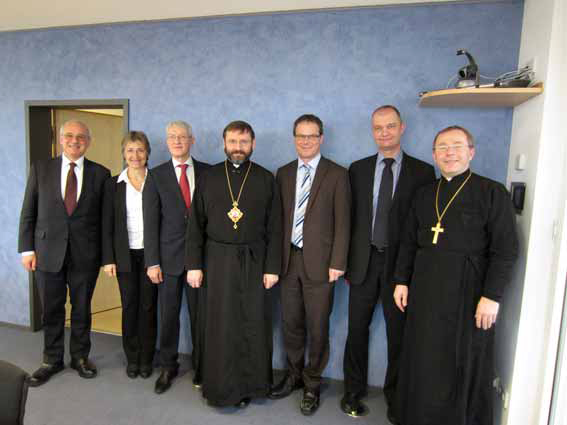 According to the leader of the UGCC, “if we use Caritas Germany as an example, we see that they serve the Church in many ways.” His Beatitude also thanked Caritas Germany for their help in establishing Caritas Ukraine. Additionally, the leader of the UGCC presented a plan of development for the UGCC through 2020 and emphasized “Caritas’ unique role in serving parishes, as a living organism and an integral part of the Church.” He asked Caritas Germany for their support and for them to invest in helping to realize these goals.

The Most Reverend Svyatoslav mentioned the German Philanthropic foundation Renovabis and thanked them for their support of the UGCC and stated that Ukrainians will reward them appropriately: “I think that with our extensive spiritual culture, we can provide that, which will help protect Christian values throughout Europe and help Europeans find their Christian roots. I hope that together, with God’s help, we accomplish this.” 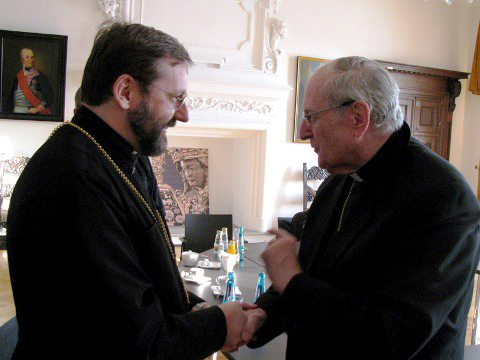 erlin. These liturgies were attended by many individuals from the Catholic, Orthodox and Protestant churches. Representatives from community and charitable organizations, leading members of Ukrainian and German societies, and community activists from various corners of Germany were also present. Among the honoured guests in Munich was a delegation from Renovabis, whose leader Fr. Shtefan Dartman, served together with the Major Archbishop.

It is worth noting that Svyatoslav’s visit created much interest in German religious circles. Church leaders were interested to learn how the Churches are developing in Ukraine, their problems and successes. His Beatitude Svyatoslav expressed a special thanks to the Archbishop of Freiburg for the “tremendous assistance given to those who suffered from the extreme cold temperatures in Ukraine” (the Freiburg Eparchy gave Caritas Ukraine funds to assist those suffering from a prolonged spell of extreme cold weather in Ukraine) and for helping develop philanthropy in Ukraine. 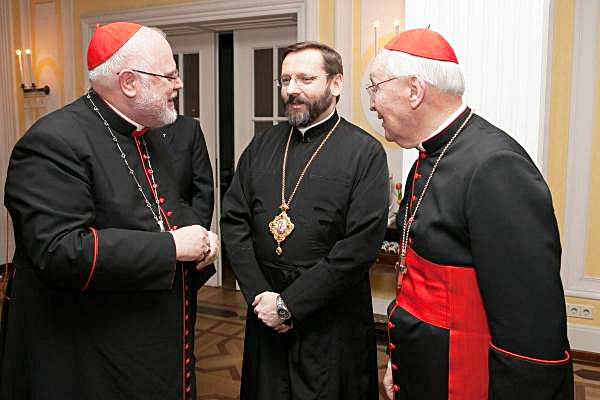 The leader of the UGCC thanked everyone who helped and is helping the UGCC to develop. This is called an exchange of gifts. “To share and not keep track, to share and not to gift. When there is a perfected gift, there is no expectation, only thanks. To gift and to receive gifts,” continued individuals who spoke with His Beatitude Svyatoslav in Germany.

The Major Archbishop stressed the role of the church in the “complicated social situation which Ukraine finds itself in,” and noted that “the Church is the only ideologically and politically independent body which can guarantee trust and truth in society.”