06.06.12
A top level international conference entitled Ukrainian Society and Narcotics: Developing a New Strategic Approach, was held in Kyiv on 21-23 May. During this conference a new strategic approach was presented for battling the drug problem through 2020. This new strategy was widely discussed by the public and by international experts. The goal of the new strategy is to reduce the supply and demand for drugs and to balance punitive measures to combat illicit drug use while ensuring that citizens have access to narcotics for medical purposes.

The League for Developing Palliative and Hospice Care, the International HIV/AIDS Alliance in Ukraine, Caritas Ukraine, The Coalition of HIV-Service Organizations, and The All Ukrainian Network of People Living with HIV/AIDS participated in the conference.

Dzvenyslava Chaykivs’ka, a representative from Caritas Ukraine, notes that in creating the National Strategic Plan they considered proposals and suggestions made during public debates in Odesa, L’viv, Kharkiv, by international experts from the International Committee on Narcotics Control, the United Nations Office on Drugs and Crime, the Council of Europe’s Pompidou Group and by researchers and representatives from public institutions.

It is anticipated that the incremental implementation of the 2020 Narcotics Strategy will allow positive changes to be made regarding the availability of Narcotics in Ukraine. Other posit

ive changes include decriminalizing the drug dependant in order to improve treatment facilities, improving the system of drug classification, improving the effectiveness of illicit drug use prevention efforts, treatment and rehabilitation facilities and completing joint educational projects to run in the penal system. It is expected that decriminalizing drug addiction will lead to more people seeking help for their dependency issues earlier which, in turn will lead to a reduction in overdose related deaths.

Experts believe that implementing the proposed strategic plan will cause a significant decrease in the illegal distribution of illicit drugs in society. This, in turn, will lead to a healthier nation. Ukraine is open to a broad discussion of this topic. Ukraine’s state policies on illicit drug use are similar to and supported by the international community. Together with the United Nations Office on Drugs and Crime and the Council of Europe’s Pompidou Group we hope to start a series of promising projects.

The current drug policy should be created on a balanced approach which has clearly identifiable goals that significantly reduce the non-medical use of narcotics, on the one hand; and on eliminating the infrastructure which enables the drug trade to thrive on the other.

This strategy is the main factor in the drug policy and the state determines its nature, content and how it will be implemented. It is based on the Ukrainian Constitution, national legislation and on fundamental principles of the UN, Council of Europe and the European Union, including the Convention on Protecting the Rights of Individuals and fundamental freedoms, which state that no person should be subject to torture, inhumane or degrading treatment or punishment, and the Convention for the Protection of Human Dignity in communications related to biological advances or me 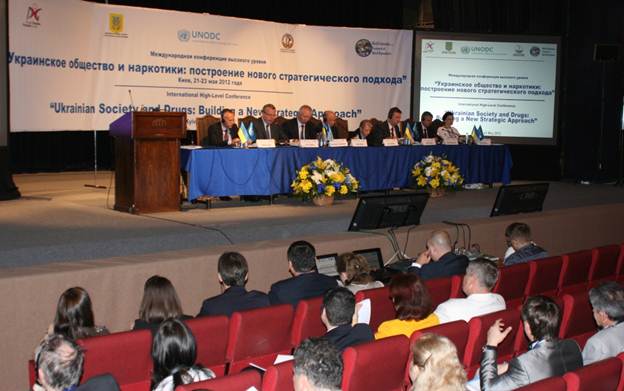 dicine; additionally they stipulate that treatments can only be administered if the patient has given voluntary informed consent for them.

The new drug policy is driven by the demands of other vital state functions are making on it. This requires a radical restructuring of the drug policy so that it affects the health, safety and future of the nation. The current content and methodological principles of the Strategy take into account the globalization of social processes, the humanization of many aspects of life and the priority of human rights and freedoms. A person—her life and health, honour and dignity, inviolability and security—are recognized as having the highest social worth; this human based approach is the underlying aspect of the new Strategy.