Caritas Ukraine implements 5 assistance programs to victims of EuroMaidan, families of the deceased, the displaced and victims of military operations in the Eastern Ukraine

20.08.2014, Ukraine
Since the end of November 2013 till now Ukraine’s capital and other cities are being seized with complicated social and political events. Because of uncontrolled crime of acting authorities and violence towards peaceful Ukrainians thousands of them are injured, more than 1600 were killed, hundreds are reported as missed and tenths thousands of people were forced to leave their homes running away from places of invasion and terror.

According to the official data of the Ukrainian Ministry of Health – that is considered underestimated by civil society activists – more than 120 peaceful Ukrainians were reported dead during EuroMaidan events, over 2200 people were injured. As of August 13 29 persons who took part in EuroMaidan are still considered as missing. Another 47 people died during clashes in Odesa on May 2, 2014.

Fighting in Eastern Ukraine killed at least 1543 and wounded 4396 (2589 are civilians) since mid-April up to 7 August, including 30 children – it is said in UNO report as of August 6. Losses of Ukrainian military forces due to armed hostilities and related accidents during March-July amount to more than 390 people (as of August 8). According to the UNO Human Rights Monitoring Mission, since mid-April terrorists abducted hundreds of people. Among them: 46 journalists, 112 police officers, 92 military men and a frontier guard, 26 OSCE representatives, 2 deputies, members of political parties and heads of local councils. According to the Government of Ukraine, 924 persons were abducted by armed groups since mid-April 2014. As of 8 August, the location of 459 persons remains unknown.

As a response to such circumstances Caritas Ukraine (CUA) has been implementing large-scale assistance projects to victims of EuroMaidan, families of the deceased, the displaced and victims of military operations in the Eastern Ukraine, including:

1. Medico-social and material assistance to victims and families of the deceased during mass protests in Ukraine
Since April till the end of July 2014 Caritas Ukraine selected 60 the most needful people and provided assistance to them. Among them were those who had bodily injury (grievous, moderately severe and trivial), and also low-income persons who had an acute need in decent help and support.

Scope and duration period of assistance were defined depending on each separate case and needs. Assistance was rendered on the basis of Caritas Ukraine regional organization in Kyiv, Lviv, Ternopil, Kolomyia, Novovolynsk, Brody and Boryslav.

2.  Medical treatment and rehabilitation of long duration, notably for persons injured during EuroMaidan and also seriously wounded during anti-terroristic operations in Eastern Ukraine.
The project foresees care for persons who received a serious bodily injury or lost a part of their body, are low-income, residents of villages or small towns from all regions of Ukraine, have an acute need in decent program of rehabilitation that will include not only medical care, but also psychological, social and material types o

In order to provide chargeless medical examinations and consultations to victims with further determination of tactics and scope of required medical assistance program employees cooperate with administrations of clinics in Ukraine and abroad. There is also ongoing collaboration with initiative groups of EuroMaidan volunteers; united data base is being used. Caritas Ukraine workers actively involve hospitals administrations to optimize expenses and to find additional sponsors for program implementation.

Project was launched on the 1st of June and up to these days with efforts of Caritas workers and partners almost 80 victims have benefited from consultations. A range of operative treatments – prosthetic repair, diagnostics and consultations – was provided gratuitously, predominantly for victims who didn’t receive comprehensive treatment or had subsequent complications. As of August 15 the number of clients who receive such assistance amounts to 46 persons.

During the next stage of project implementation, in September-October, medical treatment and rehabilitation of long duration of seriously wounded will be organized; this stage foresees treatment in cases when period of fractures fixation comes to an end, surgical intervention, treatment of spine and head injuries caused by gunshot wounds etc.

3.  Psychotherapeutic assistance to victims (family members and witnesses) of mass protests in Ukraine.
This project foresees rendering of psychological and psychotherapeutic assistance in form of team and face-to-face work with victims, their family members and those who witnessed recent mass protests in Ukraine. Such activity is being implemented by qualified specialists on the basis of Caritas Ukraine regional organizations in Kyiv, Kolomyia, Novovolynsk, Drohobych, thanks to the involvement of 17 psychologists and psychotherapists in Kyiv, Kharkiv and Dnipropetrovsk.

All in all, the project seizes 320 persons and is aimed at crisis intervention and long-lasting care of people in need of psychological follow-up.

In order to enhance the process of rendering of such help Caritas Ukraine organized two trainings for specialists of Caritas organizations, service of chaplains in Commission on healthcare of the Ukrainian Greek and Catholic Church that are involved in assistance to Maidan victims in Ukraine and 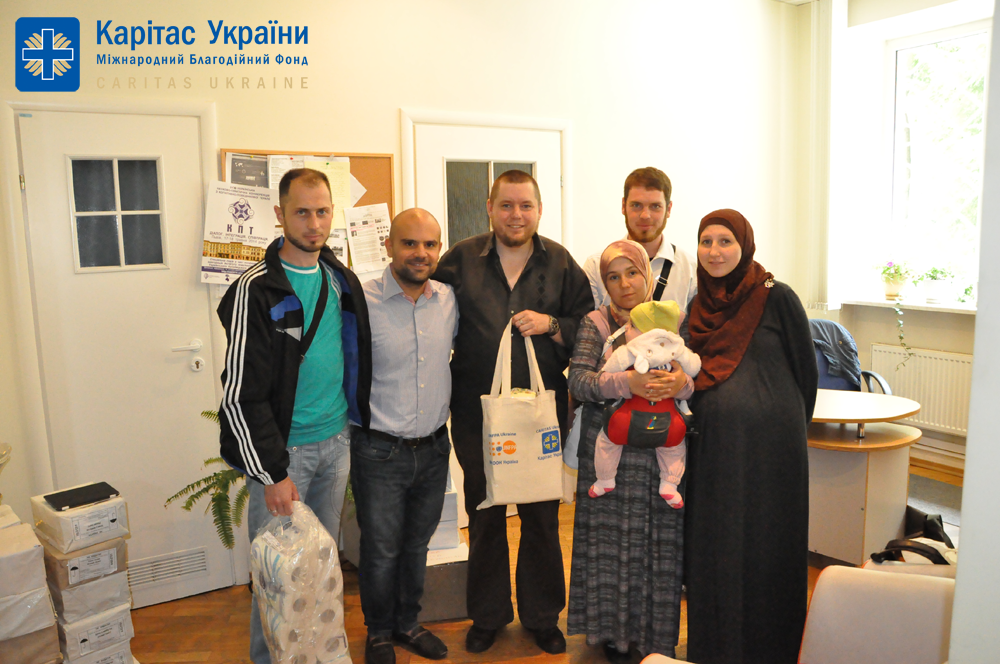 experts of CO “Association of specialists on overcoming of consequences of psycho-traumatic events”; there is an active cooperation with Ukrainian Catholic University, other psychologists and psychotherapists who work in hospitals, victims of mass protests and ATO, families of the deceased.

4. Care for IDPs from Crimea and east oblasts of Ukraine.
Project is aimed to provide the possibility of safe and dignified life for IDPs who dwell in Western regions of Ukraine. Caritas employees have the following objectives for such activity:
•    Securing basic needs of the displaced in Western oblasts of Ukraine (food, clothes and shoes, hygiene kits, and also accommodation and transportation services);
•    Provision of legal assistance (counseling and support in preparing of documents) and social follow-up (assistance  in adaptation, help in search of employment);
•    Psychological support and consultations for IDPs who are vulnerable and affected by the conflict (include preliminary diagnostics, team and face-to-face work with children and adults).

Caritas Ukraine’s approach to care for the displaced is personalized and foresees scrupulous evaluation of their needs. Attention is focused at the most needful: first of all, there are pregnant women, large families and families with physically challenged and elderly people. Caritas workers don’t duplicate assistance that is provided by other organizations, services and initiatives, on the contrary, we coordinate our efforts to render the most efficient help to the displaced from Crimea and Eastern Ukraine. Our goal is to assist every person in finding ways to set up own home in new conditions.
6 regional organizations of Caritas Ukraine in Ivano-Frankivsk, Lviv, Kolomyia, Novovolynsk, Drohobych, Sokal have already rendered and are providing help for over 2000 displaced. 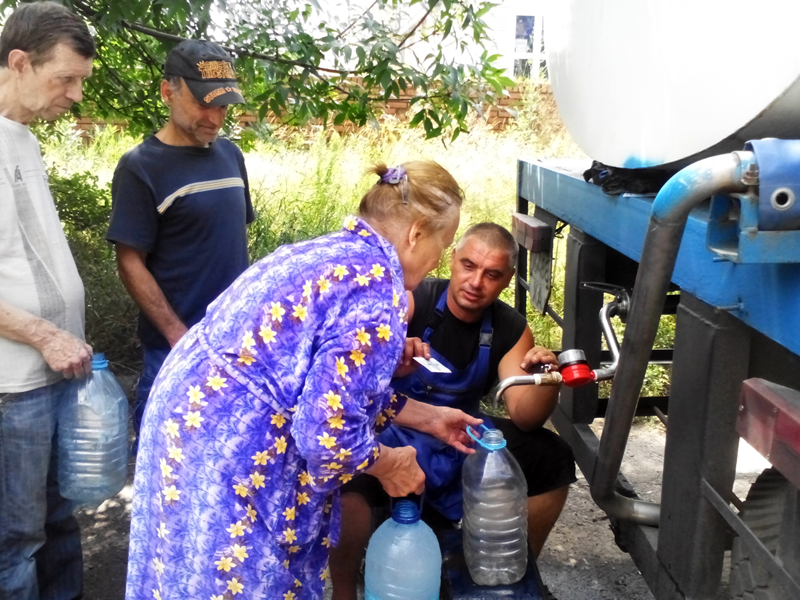 5. Assistance to victims of humanitarian crisis in Eastern Ukraine.
From the very beginning of anti-terrorist operation in Eastern Ukraine and IDPs fleeing territory of military operations to all oblasts of the country, Caritas Ukraine focused its activity on assistance to the needful in Donetska and Luhanska oblasts. In particular, when infrastructure of liberated Slovyansk was paralyzed because of damage of electricity and water supply systems, canalization, Caritas employees secured over 15 000 needful people in Slovyansk and Kramatorsk with over 110 tons of potable water.
Furthermore, residential care home in Donetsk that takes care of nearly 50 lonely seniors received assistance: hygiene kits, medicines and equipment were purchased for the full-fledged functioning of this facility (provided help amounts to 9.600 USD).

On the basis of recently created representative office of Caritas Ukraine in Kharkiv from September it is planned to secure basic needs (food packages and hygiene kits, clothes, shoes, heaters and potable water) of several thousands of people who faced humanitarian crisis in Donetsk and Luhansk oblasts, and also rendering of social, legal and psychological help. First of all, this work is targeted at elderly persons, people with special needs, orphans, low-income individuals and large families. Moreover, it is planned to provide glass and insulating glass units and repairing/replacing broken windows for 4000 residents of Slovyansk and suburbs, and additionally in 5 schools and kindergartens.

Total budget of this field of activity will amount to over 1,5 mln. UAH.