The Striy Branch of People with Disabilities Befriended Dozens of Students

16.04.12
What will philanthropy look like in 2020 and what does society need to do today for a better tomorrow. This is what the attendees of the IV International Conference of the Ukrainian Forum of Philanthropists explained, questioned, argued about and assessed during the conference. At the end of February nearly 300 delegates from various regions of Ukraine and guests from Germany, Great Britain, Spain, the USA, Brazil and Russia came together. They included directors of leading charitable foundations, international umbrella associations, business managers, private philanthropists, journalists and volunteers.

In 2010 for the first time they conducted an international survey on how institutionalized philanthropy is developing around the world. The survey showed that a singular model for developing philanthropy doesn’t exist despite the fact that the challenges are similar, regardless of country or region. Today, even the leaders of global umbrella organizations and charitable foundations are searching for answers to what their priorities should be, what the current trends are and what challenges philanthropy faces.

Rosa Halleho (Spain), President of the Donors and Foundations Networks in Europe (DAFNE) identified global priorities: 1) improving legislation and the tax environment for philanthropists; 2) developing an infrastructure so that it could advocate for the philanthropic sector; 3) establishing cooperation, rega 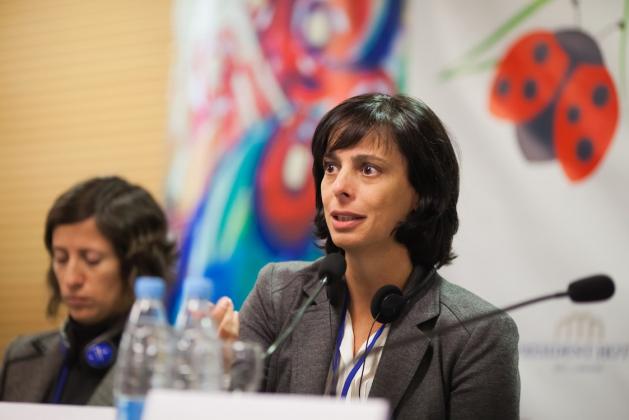 Helena Monteyro (Brazil), Executive Director of the Worldwide Initiatives for Grantmaker Support (WINGS), organizer of the above mentioned survey, showed that investment in philanthropy and its effectiveness is increasing every day. The key to success, according to guests from Brazil is to combine the forces of business, the government and communities. Interest in such cooperation on the global level is increasing.

At the same time Anatoliy Zabolotnyy, moderator of the discussion and Director of Rinat Akhmetov’s Foundation for Developing Ukraine (Ukraine), noted that such cooperation will not be easy to establish because the visions and values of various organizations and people differ. He offered a hypothesis that, on a global scale, the philanthropic sector will be facing a crisis in 10 years if they don’t keep abreast of their “market” and become a hostage to the mechanisms which they have come to rely on. 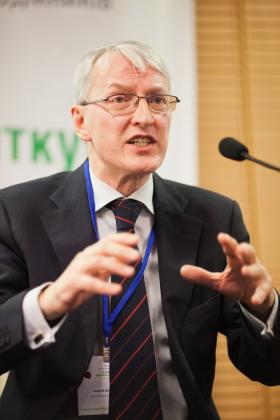 The more optimistic Andriy Waskowycz (Germany-Ukraine), Vice-President of Caritas Europe, President of Caritas Ukraine, and Member of the Board of the Ukrainian Forum of Philanthropists (UFP) noted: “I am not afraid of competition or of the fact that we are vying for limited resources. We should work together to resolve these issues. The state gives money to charitable organizations to address social issues not only in Ukraine; this is a general European practice.”

Ruslan Zhylenko, Director of the Carpathian Fund (Ukraine), and Member of the Supervisory Board of the UFP, agrees that there is a lot of competition, among philanthropic organizations, for resources, but he feels that thanks to this natural selection, well managed organizations are able to thrive. He also emphasized the significant role of the central government in developing the philanthropic sector.

Considering the economic and political crisis, it is surprising that unfavourable laws for philanthropists exist in Ukraine and that there are such an insignificant number of foundations (1 for every 4,000 citizens compared to 1 for every 100 citizens of Holland). This statement supported allegations made by most speakers that: corporate responsibility and philanthropy among public personalities is developing; that there are benefits to having new people enter philanthropy, including some individuals who are very wealthy; and that standards for charity are emerging and criteria are being recognized to determine who the best philanthropists in the country are. Despite social problems, half the budgets of community 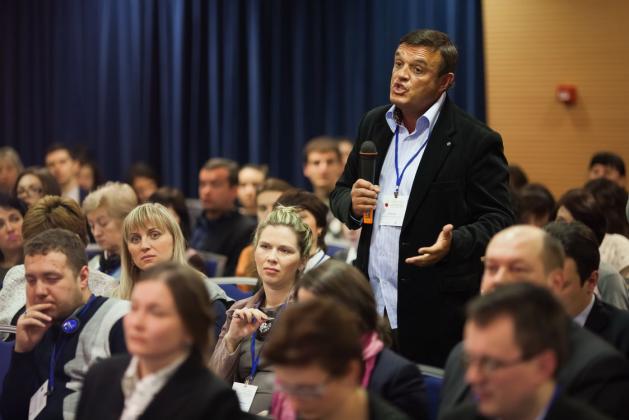 organizations in the country are financed by donors, half of which come from Ukraine [approximately 95% of Caritas Ukraine’s funding comes from abroad].

Ukrainian Presidential Advisor, Maryna Stavniychuk assured those gathered at the conference that the Ukrainian government has developed a dialogue with the people and expects practical proposals for developing philanthropy on a national level. Ms. Stavniychuk avoided harsh questions about the delay in the second reading of the bill On Philanthropy and Philanthropic Organizations by announcing that the bill is “currently being discussed” by officials. She also acknowledged that the philanthropic sector is “a step ahead of the government” in the social sphere.

Nothing surprises people in Ukraine; this was confirmed by the questions posed by the audience. The most pressing issue was how to find donors. Mr. Waskowycz is convinced that umbrella organizations and donor forums, such as the 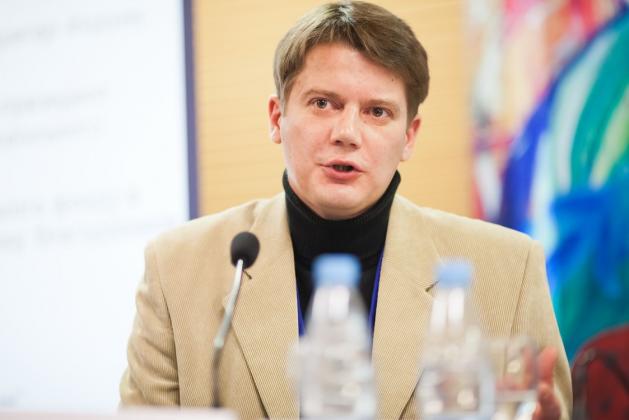 Ukrainian Forum of Philanthropists do this best: they collect, analyze and generalize information on the possibilities and needs, help build networks and prevent the duplication of efforts.

During the IV International Conference Philanthropy 2020: Vision and Strategy for Development there was a bazaar. The items for sale at the bazaar were designed to popularize philanthropy in Ukraine and to encourage citizens to participate in doing good deeds—competitions, programs and portals (the First Ukrainian Portal on Philanthropy, The School of Foundations in ICAP communities Union, the EDUkIT project, the Institute for Professional Fundraising, the Leadership and Governance Institute at the Ukrainian 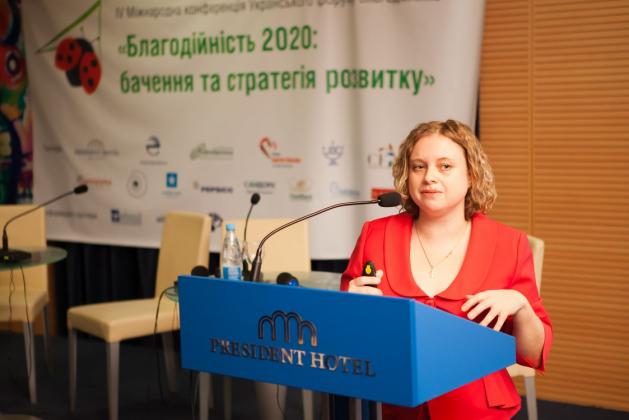 The Ukrainian Philanthropic Marketplace also presented their work; it is the first project in Ukraine which involves a massive number (every Ukrainian citizen) of philanthropists. Using Caritas Ukraine as an example we note that even thought their work is not widely recognized because they haven’t started advertising, regional Caritas organizations have already joined the project and have been successful with their fundraising activities. To date, nearly 75,000 UAH have been donated to the Exchange by average Ukrainians. The average donation is 160 UAH.

Despite the fact that a large number of news outlets covered the conference, as usual they didn’t spend much time on it. Professionals in the philanthropic field criticized journalists for their u 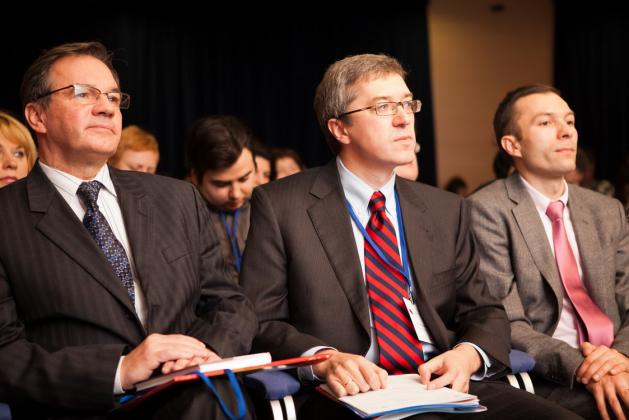 nprofessional coverage of certain social issues. When an interview was being conducted by journalists Olena Hlads’kykh from the Delo newspaper and Anastasiya Rinhis from the magazine Focus, on the stage during the conference Building a Foundation of Trust: transparency and openness of philanthropy guests from the Microsoft Corporation and Brothers Klitchko Foundation noted that if you want to be transparent, you don’t necessarily need your own newspaper or TV station, you can use the Internet. They urged their colleagues not to be passive but to advertise their efforts to help their reputation, because if organizations don’t advertise themselves someone will make up stories to fill the void.

As ex-financier Piter Kuloy (Hungary) noted: “If you are a philanthropist, you don’t have to advertise. But if you want people to give you money then conduct your charitable deeds publicly.” Mr. Kuloy said that in the USA where he lived before moving to Hungary, the budgets of philanthropic organizations are funded in three ways: from endowments, from small donors 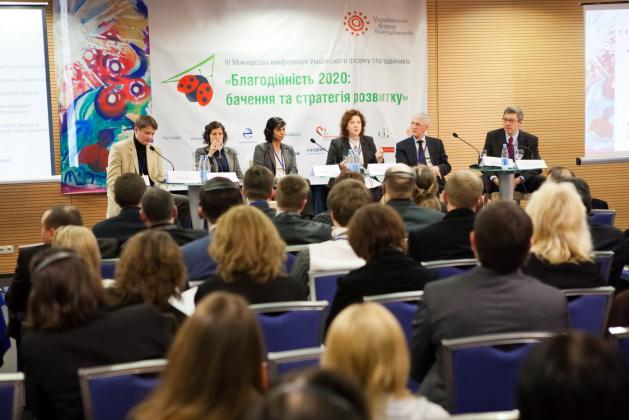 , and the rest the organizations earn on their own.

The words of Ihor Didkovs’kyy, Ukrainian philosopher, financer, businessman and philanthropist sounded even more ironic: “Philanthropy in Ukraine is nicely, artistically enhanced egoism.” “For me, a sponsor is scum; it is a person expecting something for their donation. Patronage should be a calling Mr. Didkovs’kyy cares for his parents and family. Despite his pessimistic view of the future of philanthropy in Ukraine, Mr. Didkovs’kyy continues to be an active philanthropist.

More on the Philanthropy 2020: to Dream is good, to Plan is necessary Conference click here.