“People who are hiding in basements, hungry and freezing, but they don’t move away from a conflict area because they are afraid of Western Ukraine,” IDP woman from Donbas

10.03.15, Drogobych
For the last year Caritas of Sambir-Drohobych Eparchy of the UGCC provided help to more than 1000 IDPs and victims of humanitarian crisis in Ukraine. Such assistance includes partially covering of rent/utility payments, food packages, purchasing of winter clothes, provision of medical aid and medical kits for large families, legal support, psycho-social follow-up and help in employment.

“Starting March 2014 nearly 100 families of Crimean Tatars moved to Drohobych. Needful people from these families were/are accommodated and received/are receiving financial and psychological support in local Caritas. Afterwards, there was a growing inflow of IDPs – more and more people were moving from Luhansk and Donetsk oblasts.

January and February 2015 became the most challenging period for us, because not only residential buildings, kindergartens and schools were destroyed, but the whole infrastructure of cities in eastern Ukraine was damaged,” retells Nataliya Golynska, administrative director of local Caritas.

Recently Caritas Drohobych received new families from occupied territories. This time there are two families from Debaltsevo that found themselves in horrible situation: their houses were destroyed by shelling, and father in one of these families died during bombardment. Till the very last moment they hoped for better development of events, but when their houses were ruined and mothers and grandmothers were left alone with little children – they had no hope and strengths to stay in their native town.

“We came from Donetsk oblast, not far from Shahtar town. Our village was constantly shelled. Firstly, situation in our area was highlighted in media, but then we were forgotten. When we were moving away, our house was completely destroyed. My husband died when our village was shelled, there were 5 more people killed at that time.

When situation became really critical, we moved to Yenakievo, and then – in Kramatorsk. We lived together with other IDPs in one big room. To be honest, many people are afraid of moving to Western Ukraine. In our village people are hiding in basements, hungry and freezing, but they are scared to move away from a conflict area. We weren’t frightened. My children had chance to visit Ivano-Frankivsk during school vacation, that’s why I don’t understand all these fears and prejudices about Western Ukraine.

Assistance to Kramatorsk comes  from Western Ukraine. DNR and LNR rebels gave us absolutely nothing. Particularly here, in Caritas, we were housed in a nice room and had all required living conditions created. We hope to come back home, but only under condition that this territory will be under control of Ukrainian government,” shares her painful experiences Oksana, who came from Drohobych with three little kids and mother-in-law.

Nowadays all team of workers in local Caritas, first of all, actively helps IDPs and victims of humanitarian crisis. Those who were beneficiaries soon become volunteers for their compatriots. These days in Drohobych all efforts are targeted at annual traditional initiative “Easter prize” – with its help healthcare products, stationary goods, clothes and food for IDP kids will be bought. 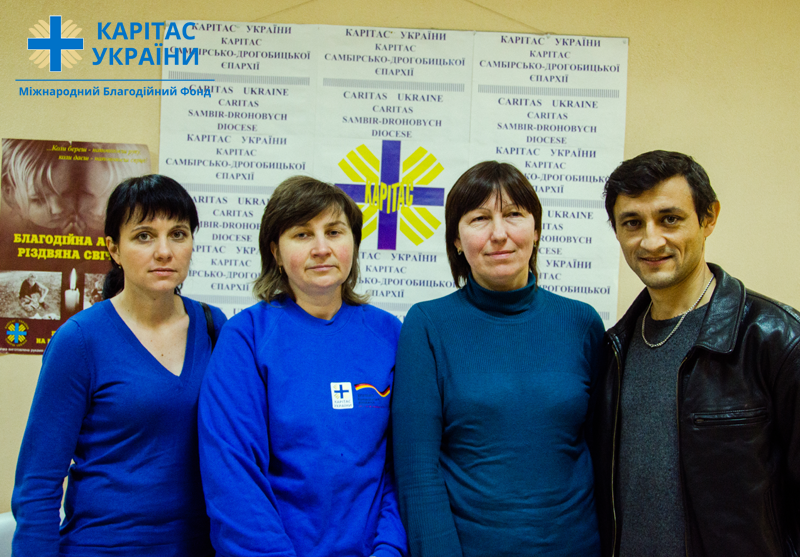 In 2015 Caritas of Sambir-Drohobych Eparchy plans to assist new inflow of IDPs in the amount of 300.000 UAH, funds for such assistance are provided predominantly by partners from Europe and USA.