Greek-Catholics from Western Poland provided assistance to victims of humanitarian crisis in Ukraine that amounts to over 710.000 UAH

29.01.15, Poland-Ukraine
Since March last year Polish community of Greek-Catholics has been providing material and financial help to victims and families of the deceased during EuroMaidan events, IDPs, wounded Ukrainian soldiers, low-income beneficiaries of Caritas Ukraine in different cities of the country, it also renders support for treatment of wounded Ukrainians and stay for IDP kids in Poland.

“A year passes from the EuroMaidan events that stirred up Ukrainians all over the country and caused complicated social and political processes. “Revolution of Dignity” was one of the stages of combating for actual independence of Ukraine. It hasn’t just changed daily lives of people and their vision of the near future of the country, but impacted transformation of attitudes and understanding of geopolitics of many people in Poland, Europe and all over the globe. And what is considerably important: once again it opened hearts of benefactors and showed what things were really significant: solidarity, hope and mercy.

Polish people acknowledged that apart from feeling of anxiety or declaration of support, Ukrainians are in need of real assistance. And those who were anonymously sympathizing in front of their TV-screens, got an opportunity to brings philanthropy and volunteering to the Ukrainian society that found itself in complicated situation,” Fr. Robert Rosa, Director of Caritas of Wrocław–Gdańsk Eparchy of the UGCC in Poland, is convinced.

Initiatives and campaigns to fundraise more than 710.000 UAH became possible by means of great interest, joint beneficence and enthusiastic activity of parish and priests of Greek-Catholic community of Wrocław–Gdańsk Eparchy. Moreover, other benefactors joined this assistance, and we are really grateful to them: Caritas of Przemyśl–Warsaw Archeparchy, Caritas of Bielsk-Żywiec Diocese, university trade union committee of the NSZZ “Solidarity” in Szczecin, educational community from Miastko  and others. Furthermore, Caritas Poland rendered humanitarian aid for the value of over 1 mln. UAH to IDPs in Ukraine.

Anatoliy Kozak, Secretary General of Caritas Ukraine, notes: “At the moment all attention of those who render assistance and provide financial support for it is focused on IDPs and people who suffered from events during EuroMaidan and ATO. But, nevertheless, there are hundreds thousands of people in need of our help in Ukraine. And we are glad that Polish community of Greek-Catholics initiated and contributed to the campaign that foresaw chargel 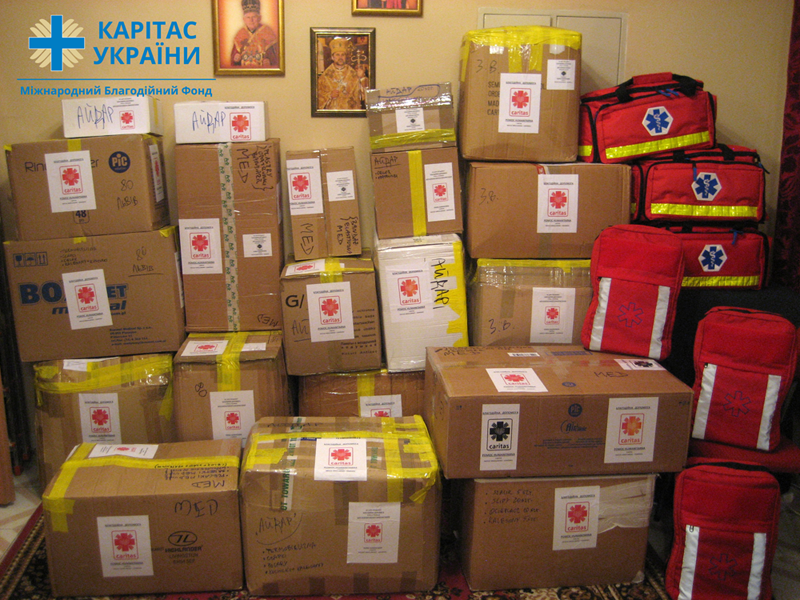 ess postal sending of parcels to Ukraine food products and school supplies, toys and other things for our beneficiaries.

Such offer of a Polish post office encouraged mobilization of many individuals and institutions to take part in such a high-minded initiative. In accordance with the provided data base of needful people, over 180 parcels at the value of almost 18.000 PLN were sent out in the cooperation with Szczecin Department of Ukrainians Association in Poland and students of 20 schools from Szczecin and its suburbs.”

At the moment Caritas of Wrocław–Gdańsk Eparchy of the UGCC together with the Association of Ukrainians in Poland prepared new humanitarian assistance at a cost of 800.000 UAH. It will include food products, clothes and shoes for kids, blankets, healthcare products etc. Among the recipients of such help will be beneficiaries of Caritas in Lviv, IDPs in Pavlograd, school-children in Shchastya, and also hospitals in Lviv, Starobilsk and Luhansk.