IMPORTANT
24.02.2014, Ukraine
Within the project it is expected to provide care to families of deceased heroes and also to assist victims of mass protests in Kyiv and other cities of Ukraine that began at the end of November 2013 and lasted up to February 20, 2014.

Scope and duration period of assistance are defining taking in account details of each case. Geographically the project of assistance to victims is foreseen for Kyiv and Lviv cities and fulfilled by national coordinator, but depending on needs regional organizations of Caritas Ukraine in 8 oblasts of the country are involved.

Moreover, Caritas Ukraine on basis of its regional organizations starts provides other types of help for victims of events that happened recently in Ukraine:
A) medical rehabilitation of complicated cases of victims;
B) psychotherapeutic assistance to victims of mass protests, protests’ witnesses;
C) care for internally displaced persons from Crimea.

Your contribution is not only a considerable help for complex care of needful Ukrainians, but manifestation of respect, trust and promotion of philanthropy development in Ukraine. 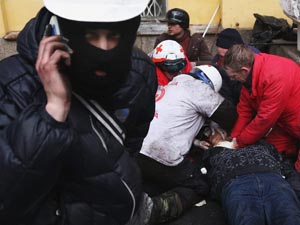