In the end of October Lviv was visited by representatives of Caritas Znojmo from Czech Republic. They met with internally displaced persons, among them were those who addressed for assistance to Caritas Lviv of the UGCC. Guests came to the 8th hospital for oncology children; they also visited “Center of leisure and social rehabilitation for young people with special needs” that operates in Caritas Lviv.

Lviv is the endpoint of Czech benefactors trip to Ukraine that started on October 18. For this time they travelled to flash points in eastern Ukraine, visited Mariupol, Kramatorsk, Slovyansk, Kharkiv and Cherkasy. Czech TV representatives were a part of the delegation.

Czech charity-doers assist in fundraising for medicines and food products for the most needful IDPs from Luhansk, Donetsk oblasts and also Crimea. Help is provided via Caritas Lviv of the UGCC. In total, Caritas Lviv got requests from over 500 families that found themselves in complicated circumstances. On October 27 a delegation from Czech visited only some of them that dwell in different places of Lviv city.

Mykola and his wife came to Lviv in the end of April, leaving in Donetsk a flat with windows broken by shelling. He used to work as a miner for 35 years, now he is a pensioner. A man has heart problems, and went through a surgery. A couple have problems with their kidneys, cause they were drinking water of bad quality all winter. Caritas helped them with food and reimbursed expenses for medical treatment. 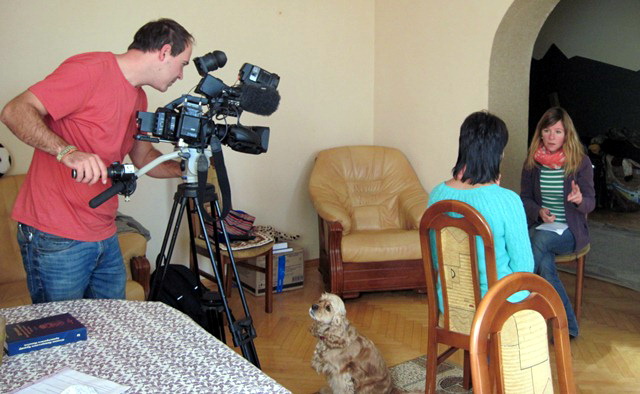 It is already a year and a half that an IDP woman Elmas has been living with her mother and 16-year-old daughter in the outskirts of Lviv. They brought their dog Carry that is companionable and reliable friend of a family. Elmas’ husband is a military man and she is involved in volunteering activity. Caritas Lviv helped a family to purchase medicines.

Olexander and Valentyna are pensioners who faced shelling in the course of evacuation from Stanytsya Luhanska in December last year. In the area close to Debaltsevo a bus with passengers overturned – ta couple found themselves in Svitlodar hospital, afterwards, they were evacuated to Lviv. They live in one room, the other room is occupied by other IDP family. Their own house is without a roof and gas connection. Caritas supported a couple with food products and reimbursed expenses for healthcare products.

Maria, a pensioner from Luhansk, dwell in “Kateryna” hotel close to Lviv city for more than a year. Firstly, nearly 40 families lived in this place and now just three of them left. Maria worked in a factory that was moved by means of humanitarian convoy to Russian Federation. She was a technical engineer. Her grandson is 7 years old, he’s going through a medical treatment from diabetes in Poland. Caritas helped an IDP woman with products, reimbursed a part of expenses for housing, helped her to purchase a pressure gauge and medicines. 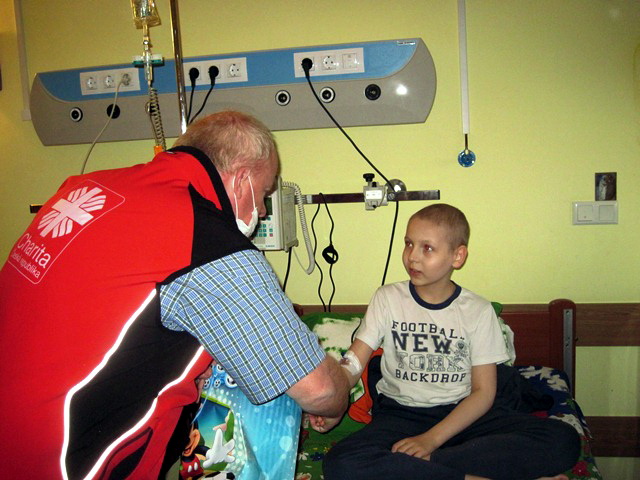 Delegation also visited an 11-year-old Andriy, a boy from Lviv, who is a patient of 8th hospital, known as Chornobylskiy. A year and a half ago doctors revealed that he has a complicated disease, he had a difficult surgery on ribs. His mother, Lesiya, still doesn’t believe that her son has an oncology. Yevhen Adamek handed over a present from a Czech lady-benefactor Mrs. Yana that gave money for his treatment. Moreover, Younger sister of Andriy – Solomiyka, received some presents.

Furthermore, Czech philanthropists were invited to the “Center of leisure and social rehabilitation for young people with special needs”. Project beneficiaries create handiworks from beads, do some weaving of textiles and knit bags and pillows afterwards, also they make Christmas candles.