11.08.2014, Ukraine
With help of 85 people of a good will and Ukrainian Philanthropic Marketplace Caritas Kyiv organized repair works in a flat of a single mother with two children. Some time ago a fire took place in their apartment and it destroyed everything in it. But now a happy family moved to a renewed flat, they are joyful and grateful to all benefactors who helped them in this complicated moment of their life.

Anya’s story is exceptionally difficult: she is an orphanage graduate, and alone brings up two children – boys, aged 2 months and 8 years. They lived in a flat (in the kitchen) where a fire happened recently and this apartment was inadequate for dwelling. Moreover, she was robbed and father of her elder son wanted to deprive Anya of parental rights.

“My brother and I were brought up in orphanage, that’s why I always believed that there will be another life for my children. When I was 18 years old we got a one-room flat. I found a job. Afterwards, my son Sashko was born and I began to bring him up alone. Everything seemed to be great and life was improving, however fate went against me,” retells Anya.

First severe stroke of misfortune occurred when her son turned 6 years old and his father wanted to take him from his mother. Anya got to know about this when she received a message that she had to return money she obtained from the government as a lone mother. The second hard moment was that Sasha’s father 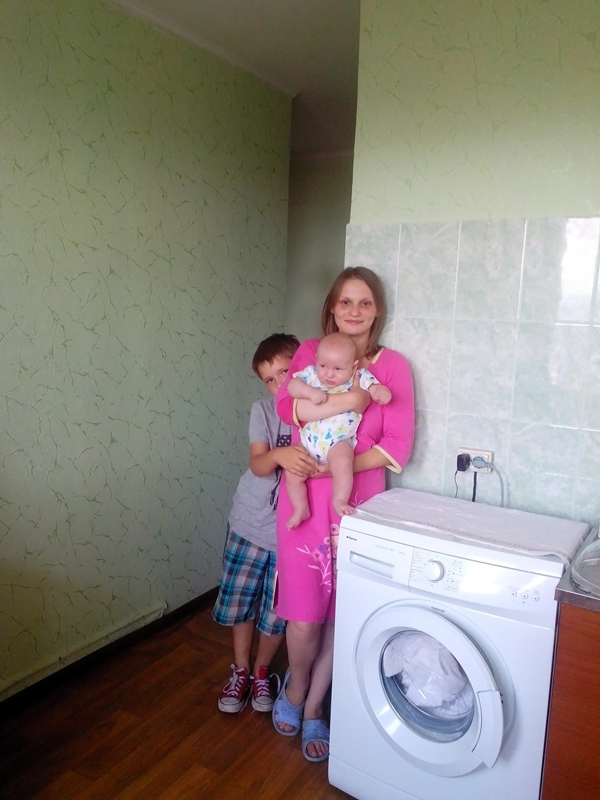 couldn’t find a common ground with his son and began to physically abuse him. Fortunately, a woman managed to save her elder son from further tortures.

Another stroke of misfortune was a fire in the flat and death of her brother when Anya was on the 7th month of pregnancy with her second child. From now forth situation became more and more unbearable: there was risk that woman wouldn’t be allowed to foster a little kid with such housing conditions. There was no window in the apartment. One of the happiest events in human’s life – birth of a child – frightened her, but she didn’t give up and continued to use all efforts to fight for a fortunate future for her children.

Just then Caritas workers started to render assistance to a young mother. The most essential things (hygiene means, food products, clothes) were collected, a place for temporary dwelling was found and with help of benefactors repair works in her flat began. In particular, employees of the ICF “Ukrainian Philanthropic Marketplace” got involved in solving of this problem. On their web-site they placed a project “We want to live with our mother!” in order to attract charity donations for purchasing repair materials for the family.

“Nowadays in the country we have many urgent needs that emerged due to war in Eastern Ukraine and fighting for dignity of an individual on Maidan. All attention of philanthropists is focused on these problems. At the same time situation of Anya and her two children can’t be left behind. For a very short period of time, almost in two months, with help of Caritas employees and benefactors from Ukrainian Philanthropic Marketplace, repair works were organized in a flat of this crisis family. Young mother and her kids have already moved to their renewed home. Woman is really happy and grateful. At the moment there isn’t any question on possibility of further dwelling of children with mother because of absence of necessary conditions.

We thank everyone who assisted us in improving a household situation of this family. Your support opened a doorway to the new future for them; they believe that there are many kind people in the world who can provide real help and bring back hope in family. There were no limits for happiness of this family when they entered a flat after it was renovated; their eyes were filled with tears and heart – with gratitude. For them it was a great manifestation of your attention, love and support and we truly grateful for help provided,” points out Roman Syrotych, Director of Caritas Kyiv.