Caritas Ukraine expresses anxiety, sadness and condolence on events in the capital and other cities of Ukraine

19.02.2014, Ukraine
During the last few months our country faces an ordeal that testifies a colossal crisis in relations between the society and authorities. Unwillingness of authorities to take in consideration the voice of citizens led to tragic consequences. We express our deep condolence to families of victims; indentify ourselves with families of persecuted, link up with victims, oppressed and abject individuals.

Mass protests began on November 21, 2013, and set the whole country and international community in turmoil. In Kyiv and other regions of Ukraine hundreds of protesters, occasional by-passers, journalists and medical practitioners and also law enforcement servants were injured. Dozens of people are already dead, thousands are wounded.

We don’t give our evaluation to the acting authorities that are guilty in this conflict, ignore basic rights and freedoms of Ukrainian citizens, and also statements of an international community – it is resulted now in civic war, led to mass violence and chaos in the country. The most important now is to save national solidarity and to stop bloodshed.

Caritas Ukraine calls to:
•    Assist in treatment and rehabilitation of victims during mass protests in Kyiv and other cities of Ukraine;
•    Help with cooked meals and drinks, warm clothes, first aid equipment for protesters;
•    Use your legal or medical education, or managerial resources to help victims (more information and contacts of aid points can be found on Facebook pages https://www.facebook.com/EvromaidanSOS and https://www.facebook.com/EuroMaydan)
•    Open doors of your houses, public nutrition facilities or offices for people in need: feed the hungry; welcome the traveler.
•    All Christians and believers of other confessions to bend in prayer and keep a fast.
•    Support only peaceful format of protests and renounce provocations on aggressive behavior.

It is high time to acknowledge the rule of the people as the highest value in the country – rule of rationality, economic and social welfare, Christian values, legitimacy of authorities and their service for society goodness. We will face ahead a challenging period when we have to be united and aligned with each other. We shall keep in mind that such a high objective as independence of Ukrainian state, its freedom, integrity and common and protection of its freedoms should be reached by decent means, because the end doesn’t justify the means.

We criticize actions that are directed at putting limitations on civil rights, notably freedom of speech and peaceful expression of will of Ukrainian citizens. We declare our support and solidarity with all people on Maidan who peacefully and wisely manifest their own dignity, dignity of their neighbors and Ukrainians in general. We confidently support peaceful character of this civil society meeting and renounce any type of violence.

Moreover, we point out that justice won’t be reached until the last wound on the victims’ body is cured, until all missing people are found, until the treat to fundamental rights and freedoms of an individual and people in general is removed, and the trust to authorities is renewed – it is impossible to build modern legal state without all these things.

“Battle and you will fight off! Let God help you! Truth is with you, glory is with you! And the holy will!”
T. G. Shevchenko 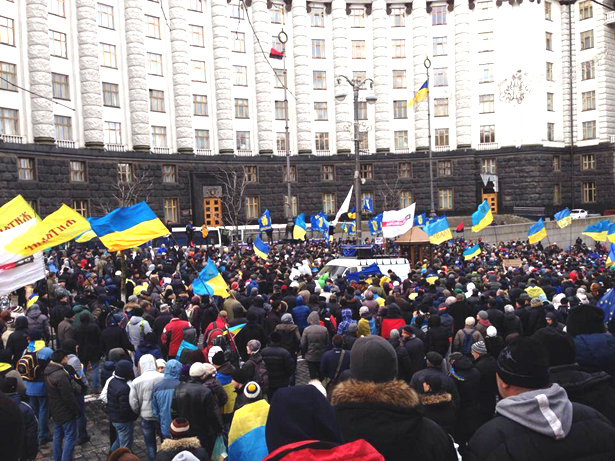