22.05.13, Ivano-Frankivsk
In the frames of USAID Campus activities (note – project of economic and humanitarian assistance that operates in different countries for nearly 50 years) local Caritas presented achievements of ‘We have right to know more’ project. It is aimed at countering human trafficking. The presentation took place at Sheptytsky square in Ivano-Frankivsk.

During celebration of the City Day USAID representatives showed work of their partner organizations from Ivano-Frankivsk who implemented project on Precarpathian territory. The aim of the Campus is to display how the US Agency for international development fosters democratic transformations in the Ukrainian society and supports various social initiatives of local communities.

Since March 2012 Caritas Ivano-Frankivsk of the UGCC has been implementing project on preventive measures against human trafficking among youth from boarding schools in oblast. It was realized together with International organization on migration and the USAID. The project was called ‘We have right to know more’.

Its results were presented at the City Day to visitors of the USAID Campus. Moreover, there was an extraordinary approach to combating human trafficking – a graphic novels exhibition called ‘On the edge’. “These are not usual graphic novels. They are based on seven real situations Ukrainian employees faced abroad” tells Natalia Kozakevych, Executive director of local Caritas.

Visitors of the marquee received informational background on human trafficking problem and ways to secure from getting into trap of human traffickers. In order to fix the information provided Caritas employees organized quizzes and games, in particular ‘Haphazardly’ and ‘Rose-colored glasses’. One, who was the first to fill the luggage with all necessary documents for travelling abroad, became a winner. For instance, required documents were passport, visa, invitation for education and work etc. At the same time artistic corner was working in the village. Ther 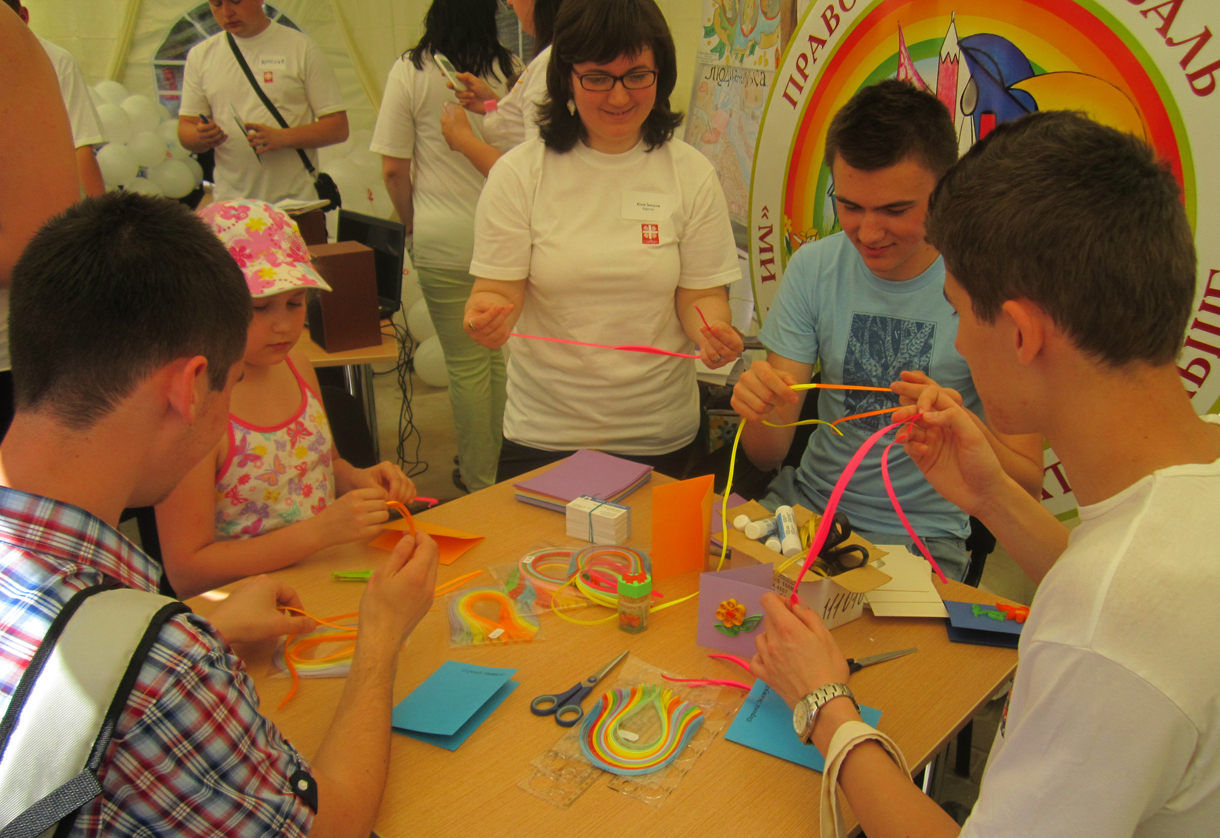 e, Caritas social workers helped children to create handiworks from beads and greeting cards in quilling technique on the eve of Mother’s Day.

“For more than 10 years USAID jointly with IOM render assistance to projects on countering human trafficking in Ukraine. We managed to achieve positive changes.

People who became victims of human traffickers know where to address with their problem and can get psychological and social support. Those who plan to go abroad can receive information how to do it safely and in the right way” explains Roman Voronovych, Public Relations Advisor of the USAID regional mission in Ukraine, Belarus and Moldova.