Caritas Kolomyia takes care of the of National Socialism

The main objective of this activity, as staff members of Caritas Kolomyia says, is to unite and provide assistance to people affected by negative influence of communism and fascism. The project beneficiaries are former political prisoners, former prisoners of concentration camps and ghettos, former Ostarbaiters and people who were born in Germany as children of Ukrainian removed by Nazis. Although all great pain and difficulties they experienced before, it is quite essential for these people today to feel that they are not alone, that there are people taking care of them as well as there are other who have very similar life histories.

Project coordinator Roman Reznik says that most of project clients are elderly people who need both social and psychological assistance. For those who are immobilized we provide fixed social worker and psychologist who visit them at homes. We provide laundry for them free of change.  Although for us provision of basic needs is not the priority we need to consider their primary desires and real needs, Reznik detailed.

One of the project clients is Lydia Bil, who is 93 years old. For three years, three months and three days she was in one of the largest Nazi concentration camps – Auschwitz (Oswiecim). She was the only one survivor from the group of 60 prisoners, after several days of starvation and deadly tortures. Now Mrs. Lydia is disabled, her sons are grown-ups, have their own children. But the terrible memories and the death number, knocked on his arm still recall this horrible period.

There are two people employed by the project “Improvement of the Quality of Life of the Victims of National Socialism in Kolomyia region” – project manager and social worker, whose mission is to visit at home project clients with limited mobility and paralyze. Also up to 10 volunteers are involved in project activities, all of them are teachers from local University. 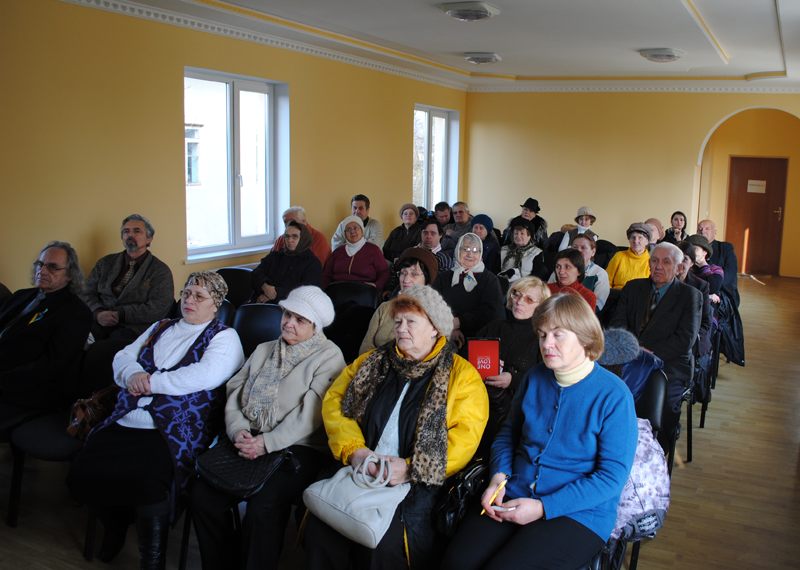 The project of care of victims of national socialism is funded by the program “Meeting Point: Dialogue” of German Federal Foundation “Remembrance, Responsibility and Future” (Erinnerung, Verantwortung und Zukunft  (EVZ)). Earlier local Caritas implemented the similar project in the partnership with the Association of Kolomyia Regional Economic Development.

“Currently we are working on the organization of the Club o Seniors where they would be able to meet, to chat or just have a cup of tea. From last December we also launched a full-fledged university of the third age – it’s a great opportunity to communicate, to find new connections, to expand the horizons, as well as to receive new knowledge and capacity for self-actualization for seniors”, – Roman Reznik says.

The “University of Third Age” has eight departments – it’s possible to learn the basics of information technology, legal literacy, health; foreign languages; psychology, cultural and leisure activities and crafts, local history and catechetical knowledge. Each course has a specialized training program and is designed to a period from three to six months.

Various courses  enable large selection of possibilities for choice of those new knowledge and skills that elderly people want to get to realize their inner potential. Study courses for seniors allows the person to reach the goals he/she might have dreamed during all their lives, but had no possibility to realized because of permanent employment,  raising children, etc. Only when they went into retirement they received possibility of self-realization.