31.05.13, Khmelnytska oblast
In the midst of May ‘Life without drugs is my choice’ city campaign was organized in Khmelnytskiy. It took place at the Independence square. Workers and clients of local Caritas got involved in the campaign. It was implemented by the Ministry of Internal Affairs department in Khmelnytska oblast and city police station.

In the course of the campaign ‘Life without drugs is my choice’ citizens got opportunity to watch and support young fencers, velo bikers, Tae Kwon Do fighters, skateboarders, and check out their own powers in arm-wrestling. At the same time running marathon was held. There pensioners were running nearby youngsters. Caritas Khmelnytskiy participated in the initiative by distributing information booklets and books ‘Truth about drugs’.

Afterwards, Khmelnytskiy city- dwellers went in grand march to area near Shevchenko cinema, where artists continued a peaceful battle against drugs. The march was headed by bikers and majorettes who excited the audience in action.

Quite a great number of people gathered to support the law enforcement initiative at the Independence square. Vasyl Yadukha, Head of Khmelnytska oblast state administration, gave a welcoming speech. He noted that the future of the state depends on young generation that, unfortunately, is more likely to become drug addicted. The oblast’ governor encouraged to lead a healthy lifestyle, enjoy life and do sport. Sergiy Shutyak, Chief of the Ministry of Internal Affairs in 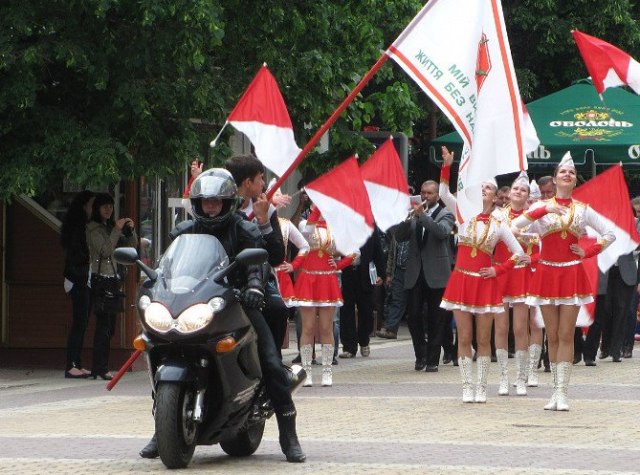 Khmelnytska oblast, joined a welcoming speech and chanted ‘Say NO to drugs!’.

“I’m very glad to join this campaign. It is very important. I’m grateful to my friend whom I have known and been friends with for a long time, to General Sergiy Shutyak for such a useful action” avowed Oleksandr Ponomariov after ‘Life without drugs is my choice’. Clients of local Caritas were also satisfied with the event organized. They emphasized its relevancy and pointed out that the veil is drawn over then real scope of addicted youth in their town. In fact, it is rather high.